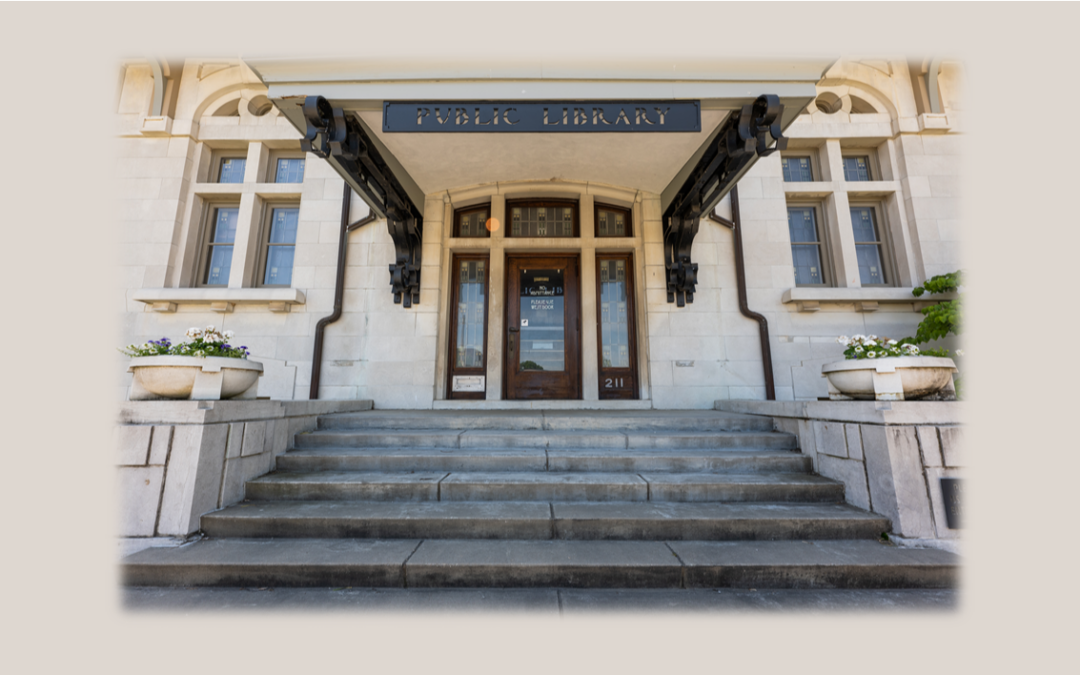 Once inside, you might have gone up to the third floor children’s area. Or you could have walked into the entryway, where you were immediately confronted with a partially enclosed “office” space nestled under a metal mezzanine. Rooms to either side were adorned with green carpeting and orange curtains. And if you turned right, there was the circulation counter, where I stood on my first day of work learning the routines of a public library.

Had I looked into a crystal ball that day and saw what lay ahead, I would have laughed—there is no way I could have envisioned still working here, in an office that once served as the program “space.” Nor would I ever have imagined organizing the move from that cramped, poorly decorated building into an addition that doubled the size of the library. The area that once housed the adult collection of books now serves as the computer lab, the children’s area moved from a windowless box to a room with windows on two sides. There were no more bathrooms that I likened to the Black Hole of Calcutta.

So much has happened since 1992, good and bad. Gail and I have often said we could write a sitcom set in a public library, but people would think the situations so over-the-top that they’d never find it believable (unless they had worked in a library, in which case it would be business as usual). However, “The Office” and “Parks & Rec” were hits with a cult following so who knows—that just might be my post retirement job.

There have been many memorable events during the past thirty years, but some that stand out are: Gene DeGruson holding a SRO crowd spellbound as he recounted ghost stories of SEK; a room full of children and adults singing carols accompanied by Phil Carter’s boisterous piano playing; hosting award-winning authors (and no doubt gushing over them because in my book, they are stars); having the audience at a program about protest songs spontaneously join in singing along with JT Knoll and Don Viney; watching the community come together to share in the spectacle of a solar eclipse.

Yet, there’s one event that stands out above all others and it still brings a lump to my throat whenever I recall it. June 10, 1997: after two weeks of frantically getting the Carnegie building emptied out and moved over to the addition, the public was allowed in to see the completed first phase of the building project. I was exhausted, trying to get everything in place (it wasn’t), and finally left for a lunch break.

As I got through the door, a man in a wheelchair approached and I said, “here, let me get this for you.” He replied, “no, that’s OK, I’ve waited years to get into the library. That door is not going to stop me.” Knowing I played even a tiny role in making that possible overwhelmed me. Can anything top that moment?

I could never have imagined everything that’s happened or all the people I’ve encountered during my time here but it’s certainly been a wild ride—and one that’s not over yet. I still have a few more programs in me but that screenwriting idea is certainly sounding good!