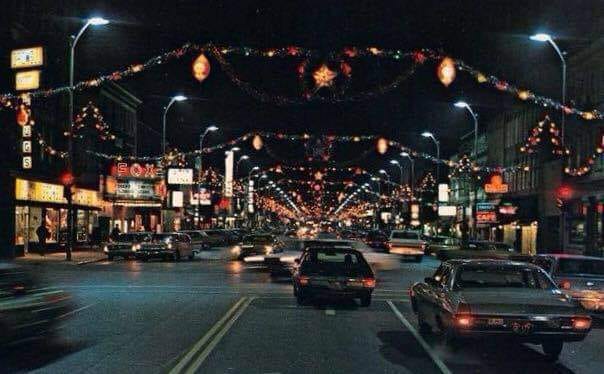 From the Stacks
By Carol Ann Robb, PPL Reference Librarian
I’m sure my eyes were as bright as the Christmas lights strung across Broadway that December evening in 1962 (or maybe it was 1963). It wasn’t often that our mother drove us anywhere after dark but we were going to the library to get books! Those silvery garlands shining overhead as she drove south were just an added bonus. Our holiday cheer just bubbled out of us as we burst into the most appropriate Christmas song for the occasion: “City sidewalks, busy sidewalks, dressed in holiday style….Silver bells, silver bells…”
After climbing those north stairs to enter the library, I turned right to head into the Children’s section where shelves upon shelves held all kinds of wonderful stories. I headed back to the southwest corner of the room and plopped myself down on the floor to look for the just right book. Still full of the Christmas spirit from the ride through town, I began to softly (because I was in the library) sing, “Silver bells, silver bells…” It was a scene out of a Hallmark movie.
Until a creature, part Grinch, part Scrooge combined into one very scary librarian, swept down on me, chastising me in no uncertain terms about singing in the library. I was just a little girl, sweetly singing a Christmas song—there was no need to traumatize me. Which I was, as well as being mortified when my older sister, who viewed the whole sorry affair, came over to tease me unmercifully about it. For years, I hated hearing “Silver Bells,” my face reddening in embarrassment as I remembered my “transgression.” Actually, I’m surprised I ever stepped across the threshold of the library again, but I made sure to steer clear of that harridan.
I’d like to claim that I began plotting my revenge that next day but it actually came by chance. Thirty years later I sat behind a desk in that same room, by then the reference area, and had planned a program, held in that space, with Lem Sheppard singing carols from the African-American culture. Yes, singing in the library! At the scene of my “crime”! And that’s when inspiration hit me—I asked the audience to join me in a chorus of “Silver Bells.” Ah, revenge was sweet as I pictured that old shrew rolling in her grave! No, that’s not a very Christmas-y thought but that woman nearly scarred me for life so I think I was allowed some leeway.
After that, I organized our annual “Coffee & Carols” program, making sure “Silver Bells” is always sung so I can once again strike a blow against that woman who did her best to snuff out my holiday cheer. This is the third year in a row we’ve not held it but I’m determined that next year there will be one more blow-out Coffee, Carter, & Carols (I’m re-naming it to honor pianist Phil). I can hardly wait.
But until then, Merry Christmas to all and to all a Good Book.